Jamal Abdul Nasser’s reference to the Persian Gulf on August 30, 1951

Jamal Abdul Nasser’s reference to the Persian Gulf on August 30, 1951


The Breibart news network provided the following report on November 25, 2013: Arab parliamentarians collectively withdraw from NATO PA session in protest of use of ‘Persian Gulf’. The report stated the following:
“The delegations of the U.A.E. Federal National Council (FNC) and the parliaments of Arab and Gulf countries on Monday withdrew from the second session of a joint seminar organized by Parliamentary Assembly of the North Atlantic Treaty Organization (NATO PA) in protest of the organizers’ designation of the ‘Persian Gulf’ instead of ‘Arabian Gulf’…In response to the collective withdrawal of Arab delegations, the organizers of the NATO PA meeting had to change the name to ‘Arabian Gulf’ and to apologize to the Arab delegations for using the other name.”
This is a notable event as the distinguished Arab statesmen (and their equally distinguished Western hosts) are in contradiction of historical facts and international legal agreements:
1) The United Nations has twice recognized the legality of the historical name “Persian Gulf” (UNAD 311/March 5, 1971 and UNLA 45.8.2 (c) on August 10, 1984)
2) Arab countries (including the countries at the NATO conference on November 25, 2013) have signed both of the UN documents. [Click to Enlarge] United Nations Editorial Directive issued on August 18, 1994 which clearly notes of the legality and correct use of the name “Persian Gulf”.
3) There are historical maps and primary references from antiquity well into the 20th century(especially Arabian sources) that attest to the historically correct name of the Persian Gulf (see alsoPersian Gulf On-line).
Equally notable is the fact that the late Egyptian President Gamal Abdul Nasser (1918-1970) himself referred to the Persian Gulf by its correct name as seen below…

Below is a document (originally appeared in the Iraqi Al_Jewar website) forwarded to kavehfarrokh.com which shows that the late pan-Arabist, Jamal Abdul Nasser (1918-1970), referred to the Persian Gulf by its correct name on August 30, 1951: Note by written  by the late President of Egypt, jamal Abdul Nasser (1918-1970) – this was transmitted by Egypt’s Cable and Wireless Company Limited on August 30, 1951.
Known for his honesty, humility, courage and integrity of character, Nasser was a tragic victim of theideology of pan-Arabism by his advocacy of changing the historical name of the  Persian Gulf. Some have speculated that Nasser may have been partly motivated to do so due to his dislike of the late Shah of Iran. Gamal Abdul Nasser (1918-1970) (Source: Famous People).
Ironically, despite decades of ideology and the re-writing of textbooks (not to mention to participation of select Western academics in historical rewriting), changing history has proven to be an exceedingly difficult task, as seen in the image below. 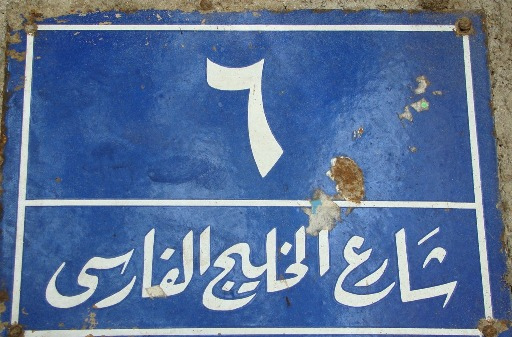 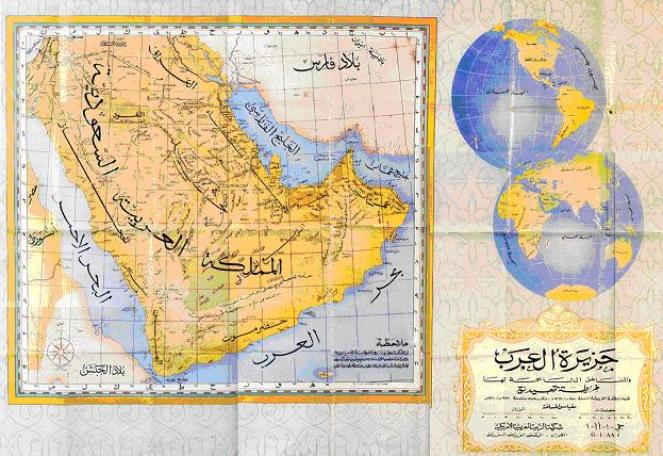 Saudi Arabian map of the Persian Gulf in 1952 (Source: posted in Persian Gulf On-line).
The map is all the more remarkable as it was published at the time of the coup d’etat of pan-Arab nationalist leader Gamal Abdul Nasser, who at the beginning of his career, always referred to the Persian Gulf by its correct name.
Nasser however became wholly enthused with pan-Arabist philosophy and began to apply the term “Arabian Gulf” from the mid-late 1950s onward. It is worth noting that it was Sir Charles Belgrave who first invented the term “Arab Gulf” and attempted to change the name of the Persian Gulf. Belgrave was the British advisor to the Arab leadership of Bahrain in the 1930s. Belgrave proposed his “Arabian Gulf” invention to the British Foreign and Colonial offices in London, where the project was quietly dropped. Belgrave however had succeeded in a way; he had set the stage for future Iranian and Arab friction. Shaikh Salman Bin Hamad Al-Khalifa (at left) and Sir Charles Belgrave (right) (Picture Source:Flicker) who was England’s Government Advisor to Bahrain. It was Belgrave who first pioneered the concept of changing the name of the Persian Gulf. The motives for such revisionist schemes are not clear, but it is possible that Belgrave was calculating that such actions would create frictions between the Iranians and the Arabs.
The British themselves soon began to see the benefits of propagating the “Arab Gulf” project, especially after Dr. Mohammad Mossadegh took control of Iran’s oil industry from the British in the 1951. Different name – same management: Anglo-Iranian Oil Company or AIOC (Anglo-Persian Oil Company until 1935) changes its title to British Petroleum (BP) in 1954 (at left).  One year before its name change (1953) the petroleum company had been instrumental in cooperating with the CIA to topple Iranian Prime Minister Mossadegh (1882-1967) (at right) – for more information consult Iran at War: 1500-1988, 2011, pp. 297-303. At present, BP has major oil interests in the Caucasus to the north of Iran.
Furious at this perceived outrage, Roderic Fenwich Owen, a British secret agent linked to British Petroleum (originally Anglo-Iranian Oil Company) saw the potential of using “Arab Gulf” as a weapon against Iran. Owen eventually published and promoted a book called “The Golden Bubble of the Arabian Gulf: A Documentary” (London: Collins, 1957). The British were not going to be ejected from the Persian Gulf without a fight – and what better way than the famous “Parthian shot” of attacking the heritage, history and civilization legacy of Persia herself. In a sense, the usage of “Arab Gulf” for the body of war known historically as Persian Gulf was first successfully popularized by Owen, two decades after Belgrave tried (unsuccessfully) to do so. Roderick Fenwich Owen (right) and the Sheikh of Ras al-Kheima (left) circa late 1950s (Source:Daily Mail). Owen’s application of “Arab Gulf” to the historical Persian Gulf was not protested by the British and Western academics/historians. There are in fact Western professors active within Iranian Studies programs who have written books in support of the Arab Gulf thesis (see Daniel Potts further below). Similarly, when Spiegel magazine and the Daily Telegraph attacked the legacy of Cyrus the Great and even insulted the people of Iran, no professors of Achaemenid studies raised any protests (see for example Iranian.com).

There are a select number of professors within Iranian Studies who have assisted the name change of the Persian Gulf (see for example below): Iranian Studies Professor Daniel Potts of the University of Sydney (top left) and his textbook “The Arabian Gulf in Antiquity” (top right) which is being used as a standard reference in Arabian universities such as the University of Sharjah (bottom image).  In the above book, Potts argues that the Persian Gulf was known as Arab Gulf since pre-Islamic times. To his credit, Potts has seemingly retracted from this and now acknowledges that the Persian Gulf is the correct historical name. However his book continues to be distributed.